The Golden Horseshoe by HarshLight is licensed under CC BY-SA 2.0


Relive the golden era of Disneyland Park at this old-timey saloon that’s been here since the very beginning. Enjoy a spirited lunch or dinner over a roundup of frontier-style chow, including pepper jack chili mac, loaded potato skins and chicken wings. Tiny trailblazers can tuck into the chicken slider meal or Kid’s Power Pack, a bounty of healthy snacks.

Ice cream float fans can sip on frosty Golden Horseshoe fabulosity, made with a choice of cola or root beer—yeehaw!

A Golden Era Lives On


One of several buildings dating back to the opening of the Disneyland Resort in 1955, The Golden Horseshoe is where Walt Disney and his wife, Lillian, celebrated their 30th anniversary with the debut performance of the original Golden Horseshoe Revue. Walt kept a private box—now public—upstairs to the right of the stage.

Take a look at the wall-mounted longhorns, which were chosen by Walt himself, the polished brass banisters and 1850s-style period chandeliers. Disney legend Harper Goff designed the saloon’s interior using a set design he had created for the 1953 Doris Day film Calamity Jane.
Photos 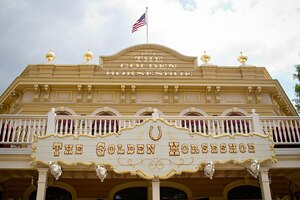 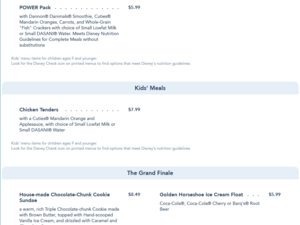 The reopening menu has a limited number of offerings, leaving off many of the classic meals mentioned in Disney's restaurant descriptions (Pepper Jack Chili Mac, Loaded Potato Skins and Chicken Wings, etc.).

Allergy-friendly meals at The Golden Horseshoe

There are no allergy-friendly meals indexed for this restaurant yet.
Show Comments (0)
Back to Frontierland Restaurants